Last term the Library Team at Joeys excelled themselves in launching an amazing “Body in the Library” investigative program in collaboration with the Science and English faculties. I promised to share this after talking about it at EduBloggerCon 2010 in Denver.  So here are some more of the details!

The focus of the project was to facilitate deeper learning in our students by creating an ‘authentic learning’ experience to strengthen writing and literacy skills across the curriculum. In English, students learned about the literary conventions of forensic fiction in their crime novel, Framed,  and how to use them to solve a crime.  In Science, students learned about how use a variety of scientific methods including analysing dental records, fragments and fibres, fingerprinting, shoeprinting and DNA samples in order to solve a crime.

These skills were then put to the test when boys were asked to solve a ‘body in the library’ type crime which the library team spent weeks preparing!

To solve the crime, students viewed the crime scene, looked at photographic evidence, read various ‘official’ forensic and crime  reports, watched video-taped evidence of the crime in action; watched interviews of the suspects; read  testimonies of different suspects; and analysed many forms of written and physical evidence!  Students employed deductive thinking skills, analysed all available evidence and established motives for the suspects in an attempt to determine who committed the crime. Lastly, each student submitted their own police report on the crime and its investigation.

This collaborative activity raised an astounding level of interest from all 150 boys – as well as raising a lot of  interest from boys from many other years.

Here’s  a brief overview of the scenario::

A body is found in the library at the end of Period 4 on Tuesday. It is a Year 9 boy who has been hit on the head with a blunt instrument.  The body is discovered by Mrs O’Connell in the Fiction area. A coroner’s report puts time of death at recess/Period 3.

The murderer is Mrs Smith. In a fit of rage, she has killed the student for not returning an overdue book.  There are two other prime suspects: Mr Smith, the Yr 9 Co-ordinator, who is annoyed by the behaviour of the student, and Jack, the boy’s friend, who had a fight with the victim.

Each boy received a forensic workbook – containing a range of materials for examination such as crime reports, witness statements and a coroners report. In addition the ‘crime scene’ was taped off, with key evidence on display e.g. fingerprints, the location of the body, and places where DNA was found.  Photographic evidence included the injury reports (fake bruising and blood on the victim), video footage of the scene of the crime (staged by students and teachers) and also hard hitting interviews.  The students were able to go into our two discussion rooms (which have a plasma screen for collaborative work) and view the footage and interviews, and take notes about what they saw and heard.

All this analysis led to some fierce competition to solve the crime, and find the murder weapon – which was hidden amongst the library shelves.  You guessed it – a steel bookend (decorated with some fake blood).

If you want to prepare a scenario of your own, here is our  YEAR_8_FORENSIC_SCIENCE framework that set up the string of evidence and clues for our project.

A copy of the coronor’s report below will give you an idea of the level of detailed evidence provided for the students to analyse.

The rest you’ll have to create for yourself! 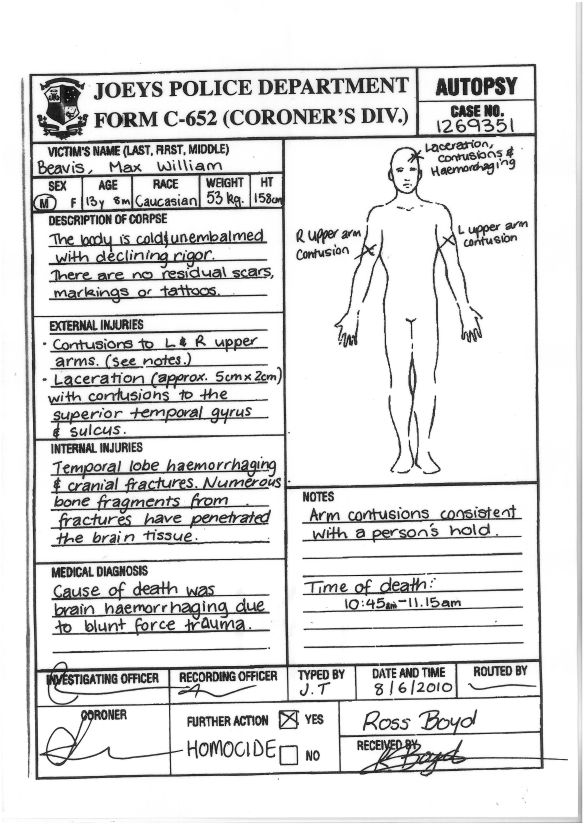 Did I mention I have the best Library Team on the planet?  This was just such a fantastic experience!

8 thoughts on “Body in the library – a murder mystery of our own!”